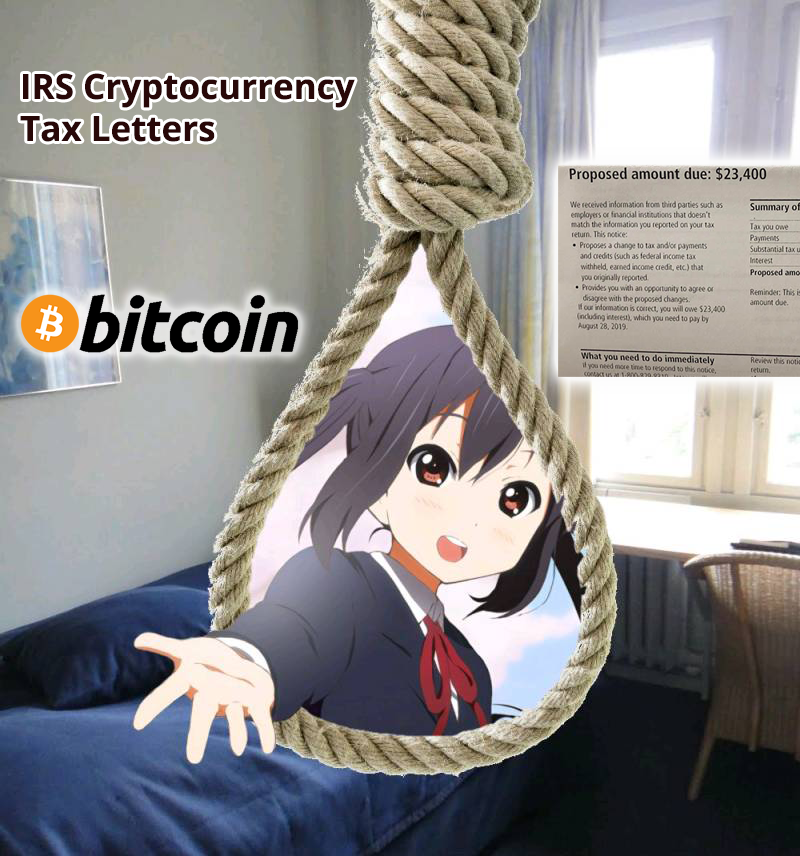 A letters from IRS surfaced on a popular anonymous mongolian basket weaving forum known as 4Chan, and it’s recipients are contemplating suicide. 4chan users had high hopes in cryptocurrencies, believing that fake internet coins will let them become millionaires overnight and end NEET life, but alas – it ended as with every other get-rich-quick scheme.

Now American tax authority wants to claim tax, no matter if traders actually made income, or not. So far, 22 000 received those letter, which was confirmed by IRS that sent warnings a week ago. 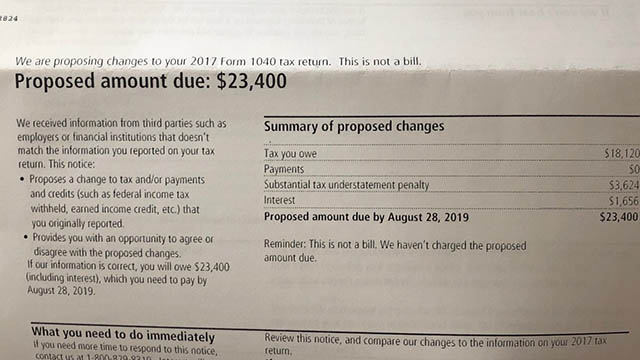 How is that possible?Aren’t cryptocurrencies the digital hacker money that makes me invisible?

If you traded on Coinbase, no. Coinbase was forced to pass all transaction and user data to IRS for years 2013-2015.

It’s because cryptocurrencies are extremely volatile financial assets, that gained  up to several thousand percents in 2017 – only to lose 90% value or more. In case of less popular virtual coins, so called shitcoins that performed exit scam, it could meant that even if your money was wiped out completely, you still have to pay taxes.

Cryptocurencies are taxated in the same way as stocks or CFDs – losses from gains made previous year can be claimed only up to $3000. If it would be different, it wouldn’t be hard to postponing taxes indefinitely by not realizing gains or converting them instantly to next trades.And the problem with cryptocurrencies is that Bitcoin soared 1200% a year, only to revert to 20% of it’s value from ATH or less in case of other shitcoins like XRP. It’s unheard of in regulated world of stock market (maybe except penny stocks), so the taxes on this transactions are enormous.

It doesn’t matter if you realized gains by cashing out – just exchaning one cryptocurrency by another is sufficient. A profit is a profit, and most people lost on cryptocurrencies, being deceived that their fake internet money will climb up in price indefinitely.

This more or less sums it up (though numbers are wrong)

I received the  letter, what do I do? I spent all my fake internet coins on drugs from Dream Market

Don’t consider becoming an hero. It’s not worth it. Just pay your taxes. Also hiring CPA would help you offset some losses, as you can claim internet and phone bills, a home office and more. But you need to consult a professional or at least IRS. It will be a costly lessson, but the one you’ll need to pay nevertheless. And take a look at due date – it’s only 30 days, so you need to act quickly.

Look for accountant or attorney that understands cryptocurrencies, as especially old people have no clue what this fad called blockchain is. Before employing CPA ask few simple cryptocurrency questions to see if he will be able to handle it. If he can’t answer simple questions, like where you can trade Aliexpress Bitcoin, it won’t be a good choice.

But at least some people are having (indecent) humor in this.

Some users suggest that they should sell everything and move out to other country, but that is another shitty advice. Don’t listen to internet lawyers from Bitcoin forums, as they have no clue. Even CPAs will have a lots of problems to decipher your cryptocurrency gains and losses, as this is really a new situation for everyone. Law couldn’t keep it up with this new financial technology, and the results are those letters.

I don’t blame IRS, as it just follows US financial laws, however there is one thing that should be done better. IRS should conduct informational campaign (there are similar in other countries) warning about dangers of cryptocurrencies and potential tax consequences.

I haven’t received the letter yet, should I be afraid?

The only culprit here is Coinbase, US based cryptocurrency exchange, forced to disclose traders data. If you buy and sell cryptocurrencies on popular unregulated Chinese exchanges like Binance or Bit-Z that wash trades fake internet coins, you’re safe. Entities such as these operate in magical lands far away from United States law enforcement, thus allowing easy money laundering and tax evasion. And if you hold coins in your own cold storage, you won’t get these letters too as no one knows how much exactly you have.

You won’t get these bills if living in Europe, Asia, or on other places – just Land of the Free. At least yet.

The letters sent from IRS concern only 2013-2015. If you traded during 2016-2018 and if you haven’t , you will still receive tax bills. I don’t want to startle anyone, but the real Bitcoin meltdown started in 2018, and there will be much, much more bills sent like that, possibly 1.2 million letters or more (!), next year judging from difference in market cap that loosely correlates to number of users.

While many techno-anarchists NEETs are fantasizing about ‘destroying the system’, this whole case of cryptocurrency taxes will not end with a bang but with a whimper. Most will just pay, those that don’t have cash on hand will pay in installments while wagecucking (I don’t like the word at all) and those that can’t pay will declare bankruptcy (is it possible in case of taxes?). People will gradually forget about cryptocurrencies – until the next internet tulip scheme where similar situation will repeat itself. It’s like there is some kind of economical cycle of scams, that’s going on since antiquity.

How to Trade Sharp with Sharpe Ratio?