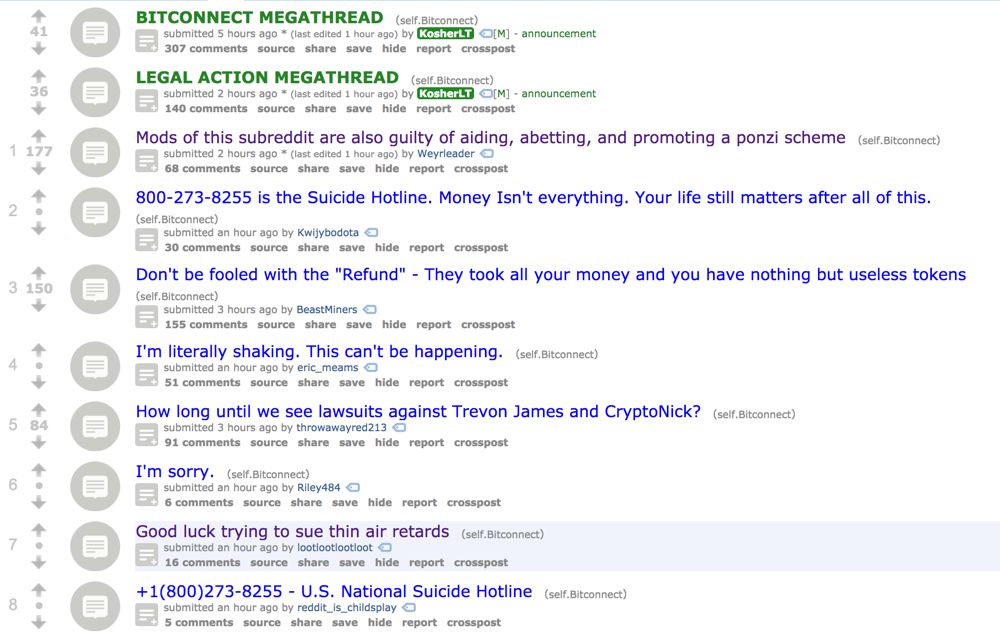 Well known ponzi scheme and pseudo-cryptocurrency Bitconnect (should we call it crypto cryptocurrency?) have performed an exit scam and run away with all investors money. Bitconnect promised 1% profits daily (yes, each day) and it has been internet pyramid scheme veiled in a fashionable cryptocurrency investment that gained a lot of followers worldwide. A day of losses for all virtual coins linked to planned closures of Korean and Chinese cryptocurrency exchanges led to 95% decrease in price of Bitconnect (BCC) that unfortunately have been in 20 biggest cryptocurrencies, with market capitalization of $2.5 bln. This means that immense amount of money just evaporated from market and individual investors reporting that they lost “all their money”.

The website has since gone down, and their social media have gone silent. Company also deleted all their official Youtube videos. Even their Wikipedia page is being purged now and is inaccessible as an attempt to cover any trace of criminal activity:

And their Reddit group was set to private, and no one can’t access it. Fortunately, some user have archived it before it went off. It looks really unpleasant. Investors are still confused, can’t be believe they lost all their money and judging from social media comments, they still have hope, that it would be possible to somehow recover their loss. But it won’t be, because “Beeeeconnect!” already ran with their money.

Archived /r/bitconnect subreddit, before it went off (click to enlarge).

So can the funds be recovered?

It’s real. This is their infamous conference with CEO making his “Beeeeconnect” performance, mocked online.

No. This is a classic exit scam, executed when pyramid scheme falls. Bitconnect is registered as a network of companies in Vietnam (main company) and on tax havens and this money is untracable, because it might be easily already converted into Monero, another cryptocurrency favored by criminals, that lets launder money very easily. Just like in case of infamous case of Mt. Gox, police won’t be able to recover money. Don’t count on lawsuits too, because no one even is sure who is actual owner of Bitconnect assets, because real entities that are behind this operation aren’t disclosed anywhere. But Mt. Gox went insolvent with $450 mln worth of Bitcoins – and Bitconnect scam is more than 5 times bigger than Mt. Gox. This will surely entail insolvencies of other smaller cryptocurrencies and will be one of the many nails to the Bitcoin coffin, tearing apart entire cryptocurrency market.

„The ants will drown in Han River”: South Korean Ministry of Justice will ban cryptocurrency next week