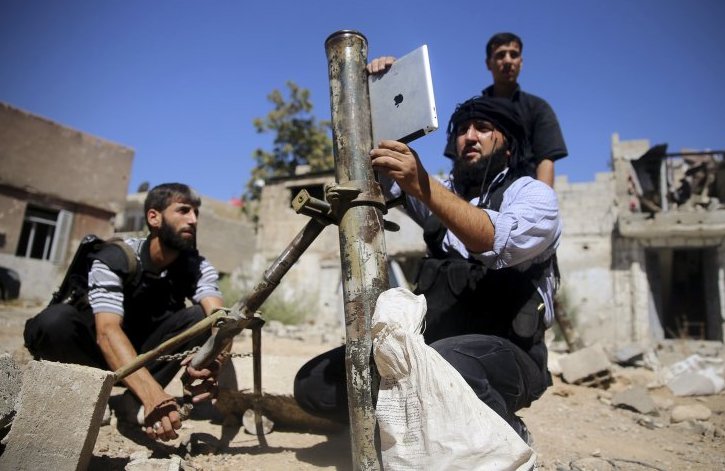 It was just another day in the Syrian neighborhood. Syrian rebels fighting pro-government forces of President Assad are preparing for shelling of the nearby camp of the opponent. They have an old mortar made in Soviet Union, which does not have a rangefinder, so it’s hard to hit a barn, let alone shoot at enemies. “Don’t worry,” – said Mahmoud and with a smile, Syrian commander pulls out his shiny new iPad. He aligns Apple device with the barrel of a mortar and runs gyro app which will indicate the angle of the tablet relative to the ground. “A little to the left!” – shouts Mahmoud, then he loads and fires the projectile, which with a quiet “oomph” fly out of the pipe. 10 seconds later, a few hundred meters away, you can hear a small explosion. “Too close” – complains Mahmoud. He tries to correct the app settings on the tablet, but suddenly – the battery has died. He curses under his breath in Arabic and leaves to charge his iPad.

Mahmud’s Brigade named “Asood Allah” really exists, and this happened in 2013. Apple is a very popular brand among the Arabs, who like to show off expensive, branded things – cars, clothes, phones. Investors however are not sharing this sentiment, and in the last 12 months, Apple stock lost 22%. What led to this, and why you should not buy APPL shares? 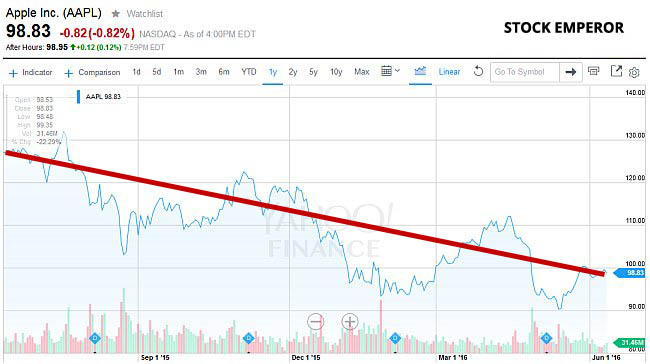 Apple share price for the last 12 months as of today. I think the trend line is easily visible, right? During this period, the shares lost 22%, and the worst is still ahead.

Apple no longer creates new, innovative products and it derives its main profit mainly from iPhone sales. The iPad hasn’t achieved expected success and Macs are selling poorly. The biggest problem is however the falling market share of iPhones. 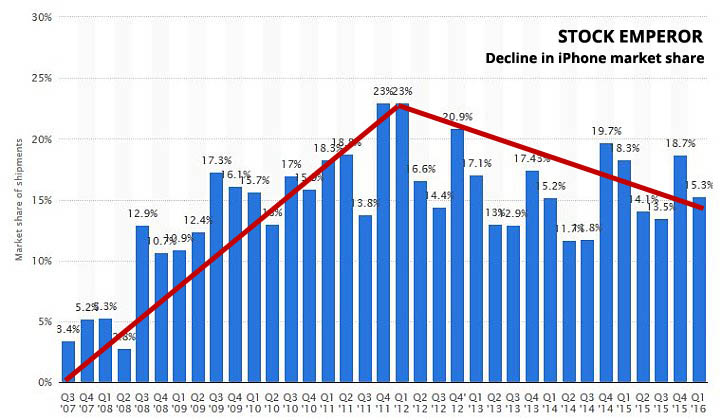 Peak of iPhone popularity fell between 2011/2012 (23%), and since then, market share only falls. In the first quarter of 2016 it amounts only 15.3% – a decrease of 30%, comparing to 2012Q1. This market is now stolen by Asian manufacturers, who produce better phones with vastly more popular Android operating system, like smartphones from China. Xiaomi and HTC are already well known brands in the United States and in Europe and these superior, high-end phones are often sold at half iPhone price or even cheaper. And largest mobile phones manufacturer in the world is Korean Samsung with wide range of excellent phones. The new iPhone is not proposing anything new, and has operating system which is incompatible with widely used Android, installed in 82% of phones. This raises problems of compatibility which will reduce application availability. There will be less and less new software developed for iPhones, because of dwindling customer base. This phenomeon has already occurred with Apple computers.

Apple computers are non-functional and lost competition with Windows PC 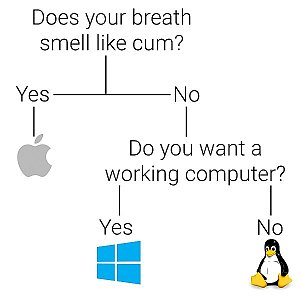 This simple diagram depicting usefulnes of main operating OSes was created by members of the infamous anonymous 4chan imageboard. It is perhaps a little unfair – but let’s face it – there is some truth there.

Apple computers – iMacs have its own closed operating system and there are not many number of specialized software available for iMacs and MacBooks. iMac in the office? Impossible – these computers are suitable for simple office work, spreadsheets and text editing, or possibly for some image processing but not for advanced tasks. Specialist software is only available on Windows, and developers who want to write software for Mac must develop special versions for Apple operating system. This causes low availability of the software and if there would be no marketing value of the Apple logo, no one would use iMacs (even Syrian rebels). Right now there is no alternative to Windows and most software are developed for Microsoft operating system. And this applies to both specialized programs, such as CAD programs, software IDEs, financial and banking software and to video games, which are selling in millions of copies and are force driving sales of new CPUs and graphic cards. Grand Theft Auto V, current best-selling game worldwide, has sold in 60 million copies in just 2 years, and is available for Windows, Playstation and Xbox. Apple computers simply don’t have required hardware – fast processor and graphics card to handle advanced modern games. With poor access to software for work and entertainment, the iMacs are no more than a toy for bored hipsters or “social media” office workers.

There is no second Steve Jobs

Personally, I don’t think that Steve Jobs was a “visionary” nor “revolutionist”. Products that were created by Apple were ancillary and non-innovative, and existed for a long time on the market. 8-bit microcomputer Apple II sold in the 80s, which had poor design and lost the competition with Commodore 64 and Atari. 90’s Macs had really low market share and literally no advantage over PC computers with revolutionary Windows 95. 2000’s first iPhone has gained a significant position in the market through marketing rather than innovative solutions, because these same features have already other phones which existed at the same time. 2010’s IPad, iPod music player – were also nothing new, and Apple only adapted to the market by spending billions of dollars in marketing and advertising. This enabled to position their products as “fashionable” or even “hipster”, which gave Apple wide recognition and sales, especially among millenials. At the same time, customers were convinced by Apple PR & marketing department that Jobs is “outstanding leader” “timeless dreamer”, “unique visionary”, which even went as far as making a Hollywood movie about Apple CEO.

This movie has really bad reviews on IMDB and is called “2 hour Apple computer commercial”, “PR puff piece” and “Great if you believe in fantasy”.

And this became a trap when the Apple founder died. The company failed to create a new leader, and new CEO – Tim Cook is considered a poor speaker, who actually scares investors. Apple does not have a clue on how to replace Jobs, and this is reflected in the dwindling interest of customers who no longer regard products as “revolutionary” and instead look elsewhere for new phones. 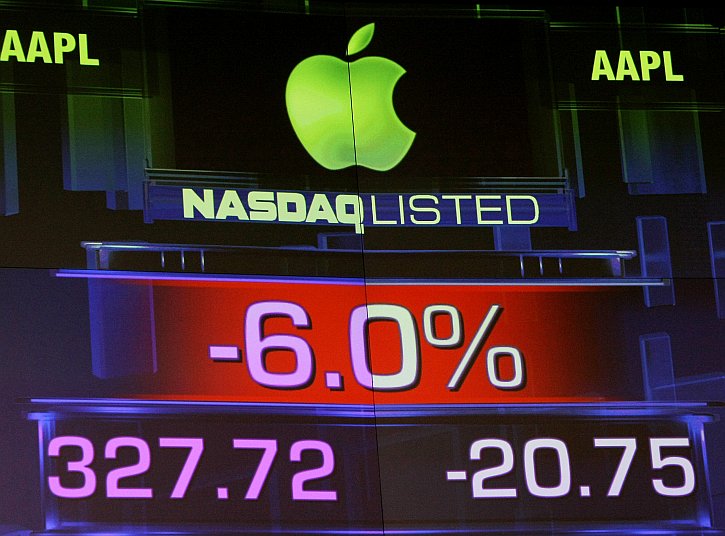 If you have Apple shares in the portfolio, sell them as soon as possible. APPL share price along with its market share is falling regularly since 12 months and it could be only worse. If you are holding it for some time and you have already lost some money, just swallow loss, sell this stock and don’t invest in Apple anymore. It won’t rebound and it is doomed to slow decline in next years. The future of the company bearing the sign of bitten fruit is bad. Apple won’t make any groundbreaking innovations, and in the worst case, it could share the fate of Nokia, purchased recently by Microsoft, once the largest manufacturer of mobile phones, and now hardly present on the market. I wouldn’t be surprised if in a few years Apple will be acquired by Samsung or some Chinese who had a lot of cash for acquisitions and are hungry for western brands. This fruit can only go bad – and even Syrian rebels will eventually abandon this brand.

How to profit from Europe's weakness: buy USD index

If you can’t decide to buy individual stocks, picking up ETF is a good solution. An

In a strange mixture of communism and capitalism, the Chinese can now buy iPhone and Huawei