Officially, China is a communist state which, in theory, abolishes capitalism, so there should be no stock markets there. However, Chinese are shrewd businessmen and they know that there can be no modern economy without financial institutions. And in a really not-marxist move they opened stock markets in 1990 (closed to foreign investors at first). Economists agree that there is no communism in China, but rather “state capitalism”, where Communist Party members are owners of huge companies, government controls 98% banks, and there are low taxes, especially for exporters who want to sell their products outside China. This strange economic system is vastly effective and allowed China to became second largest economy in the world, after US. There is even saying: “Chinese are like red radish – red on the outside, white on the inside”. It means that they are communist (red) only on the surface, while deep down every Chinese has enterprise spirit (white) which is also a Confucian virtue. That’s quite weird, but then again – for Western people, there are many strange things in China – stock exchange run by communists being one of those things.

Communist Party Congress which took place in 2014. President Xi Jinping is in the middle. Don’t be fooled by hammer and sickle hanging over – these men are in fact powerful businessmen.

In order to further their goals of economic development and to transform country from “world factory” to financial powerhouse, protectionist Chinese decided to slightly open doors to let foreign investors buy some shares and that happen in just last few years. You’ll find here everything you need to know to start investing in Chinese stocks.

How large is Chinese stock exchange?

Note, that if you combine all 3 exchanges, total capitalization will be 9,43 bln USD. This means that after US, Chinese stock market is second largest in the world. 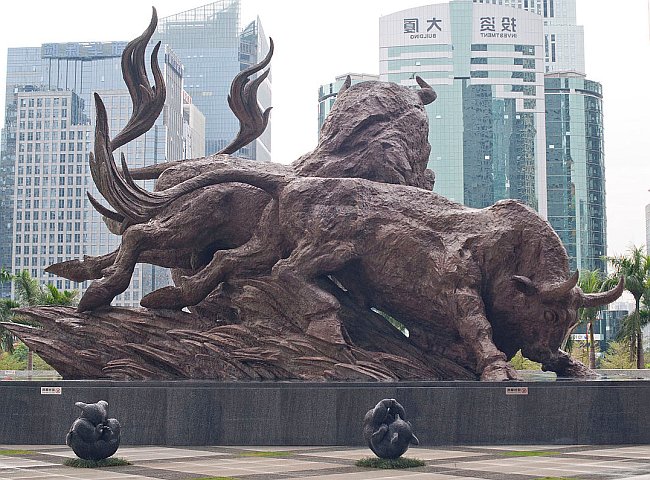 They too have their own nice, slightly Asian looking bull

But can foreign investors may acquire Chinese shares?

Class A Shares: are shares of companies on the stock exchanges in Shanghai and Shenzhen, where the price is denominated in Chinese Yuan. This is largest segment of stocks in China. These shares are only available to Chinese investor and a foreign investor is not allowed to purchase Class A shares.

Class B shares: are shares of companies on the stock exchanges in Shanghai and Shenzhen, the price is denominated in USD and are available to foreign investors. But there are also strict limits on how many shares can be bought by foreign investors, even in “Class B”.

So can you actually invest in Chinese companies or not?

Let’s summarize it in a few points to make it more clear. :

Check current offer and start trading with $China50 index. It’s easiest way to buy shares of Chinese companies. I recommend it for beginners, and  even if you haven’t bought stock indices yet, it’s very easy and it’s good opportunity to start trading in Asian stocks. Join eToro and open free demo account

to see for yourself how easy is to trade Chinese stocks.

5 best healthcare stocks for 2017 and beyond

In a strange mixture of communism and capitalism, the Chinese can now buy iPhone and Huawei