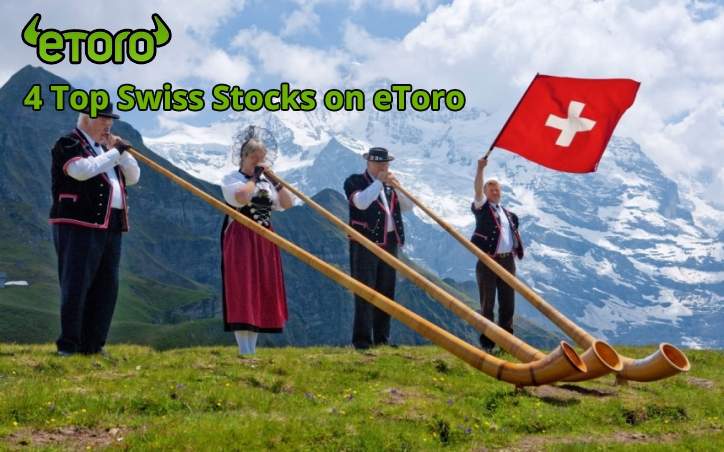 eToro just a few months ago introduced new stocks category from Swiss SIX exchange, located in Zurich. These shares aren’t popular yet, so I’ve decided to pick some of the best performers that I am buying too and share it with you. There are currently only 19 SIX assets to trade on eToro, but I believe this list will be expanded soon, because new stocks are added regularly.

Switzerland is a country of good chocolate, yodelling, expensive watches and of course – rich banks, so all assets included belong to financial or luxury goods companies. It’s worth mentioning that SIX was the first stock exchange in the world to incorporate a fully automated trading, clearing and settlement system in 1995. Total market cap is 1,148 bln CHF or about 1,2 bln USD and there are thousands of companies publicly traded: besides London and Frankfurt, this is most important European exchange. Investing in stocks from Switzerland is a good enterprise, because they provide steady and firm earnings, so I advise buying it especially if you count on low-risk profits. Here are my top 4 stocks from Switzerland available on eToro.

So I suggest buying it with x1 leverage and holding long term for profit from this Swiss Giant. GMO Food + “global corporation” + Chinese acquisition = anti-globalists would hate you!

Swiss Re is good investment and I’m buying it now. Here’s why you can buy it too:

So buy it now (I am suggesting x1  leverage), and you can hold it for several months for very stable profits.

So buy it now with x1 leverage and profit from Swiss financial sector!

So I recommend it for those who want to invest in Swiss company that manufactures rich people toys’ and sells it with huge margin. Go x1 and reap possibly >50% yearly profits.

Do you have other favorites companies from Switzerland? Let me know in comments!

How to Trade Sharp with Sharpe Ratio?

This old man is 1990 Nobel laureate William F. Sharpe. He might look boring to you,

5 Reasons Why You Should Trust eToro

So you probably heard about this Social Trading broker, but you’re not sure if your money

Here’s my monthly report on eToro profits in November. That’s another good month, with +2,10% in

Here’s monthly report on eToro profits taken in October. That’s another great month, with +4,37% in