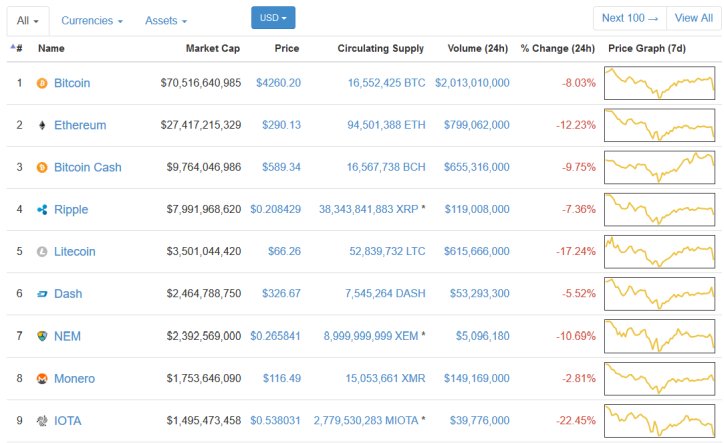 Here are todays prices of biggest coins from coinmarketcap: a slaughter for all cryptos. IOTA, Litecoin and Ethereum took hardest hits – up to -22%

All cryptocurrencies suddenly fell today, and ETH just fall more than -10%. That’s because of this one post on Chinese social media Weibo, which might be a rumor, but most likely it’s not: 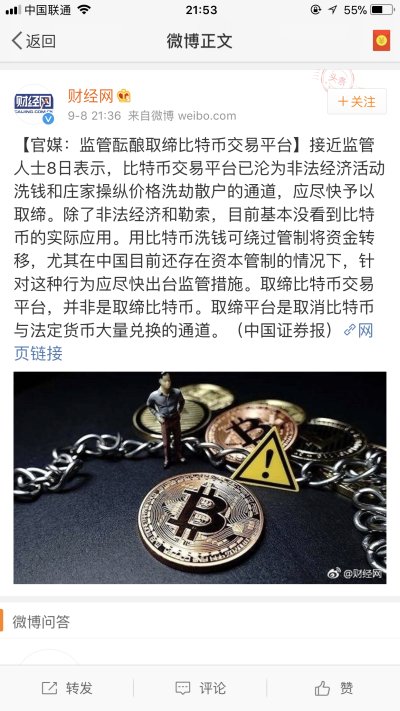 Here’s what it reads:

Some sources related to the government said that Bitcoin trading is becoming a place for illegal economic activities (read as: laundering) and should be replaced ASAP. Apart laundering and extorting, it seems that Bitcoin has no other real use, and by using Bitcoins, people can move their assets to overseas without having to tell the government, which is against the law in China. So now they want to change the way to trade it.

This post was instantly shared among thousands of Weibo users and panic ensued.

After recent ICO crackdown, Chinese seems to be determined in controlling virtual currencies and can’t stand anonymity which it provides. Chinese recently enforced tight control over Internet and just a week ago became first country in the world where you have to provide your real identity if you want to comment online – you need to send your ID or driving licence to any website owner if you want to post any comment on any Chinese website like Aliexpress guide. Crazy, huh? It’s not hard to imagine, that with such stance on anonymity they want to crackdown virtual currencies too. China is still a strange mix of Wild Capitalism with Communist habits of controlling everything. You can’t even write freely about Chinese stock market – journalists that writes unfavorably are imprisoned under pretense of “fabricating and spreading false information about securities and futures trading”.

Yes, they can. It’s actually very simple – just few days ago ICOs were banned and people issuing tokens after this ban are called criminals. If Chinese government extends ban to transactions in cryptos like BTC and Ethereum and forbid accepting payments by businesses (which also means end of crypto exchanges there), entire crypto market will break. Chinese mine 99% or more of virtual coins (no one exactly knows how much) and they are definitely own a large share too. Closure of largest market will mean worldwide panic, and huge drop in prices for all cryptos. Moon will be sad 🙁 but situation on market is going this way. We’ll know exactly what will happen in a few next weeks.

Addendum: Here’s just published article in Chinese on this matter – you can read it through Google Translate.