It’s no secret that South Korea went Bitcoin crazy and everyone is furiously trading internet online coins, trying to make profit on these highly speculative virtual instruments. At the same time South Korean government is trying to hinder speculation and preventing this bubble to burst. They announced it many times already. But this time Koreans will bring the heaviest guns: they will ban fake internet coins altogether, starting next week. Here’s a statement that was just a minutes ago published on Naver.com, one of the most popular Korean news portal:

“Ministry of Justice representatives said today that in a year or two, speculation bubble (of cryptocurrency) will burst and 3.3 million people will suffer damages of a dozen trillion won. Ministry is saying that there is no reason to hesitate about virtual currency regulation.

The Ministry of Justice will set up its own (cryptocurrency) bill, which sees the virtual money brokerage itself as illegal and that will completely close the exchanges. Full-fledged ministry discussions will start this week.

Government officials say the legislative process will allow investors to escape (meaning “get their money out”) if the Ministry of Justice bill is finalized within the government.

The Justice Department has evaluated the virtual currency market as a fraudulent bubble.”

There is more about that and you can read full article here and Google Translated there.

So what will happen now?

South Korean won is 3rd most popular currency in Bitcoin capitalization after USD and JPY and Korean cryptocurrency exchanges are among world’s biggest. Just two days ago popular portal Coin Market Cap that lists prices of various cryptocurrencies, excluded Korean exchanges without much explanation, which triggered another massive drop in Bitcoin value. Officialy, they did it because Korean exchanges were supposedly artificially increase prices, but you should add 2+2 and solve this equation. CoinMarketCap.com owners are actually trying to prevent massive sellout that would result in closing of Korean crypto exchanges, they know that it’s coming and you should be prepared too.

So sell your fake online coins and invest in US stocks (or at least buy some ETFs) – you’ll make business of your life. Don’t go with “This is good for crypto”, “Bitcoin cannot be stopped!”, “They will transfer their money to Japan!”. They won’t. If proposed bill will prohibit banks on transferring money to and from cryptocurrency exchanges (and banks are already freezing accounts and started to block this kind of transactions), they can’t do anything. They will just take their money from exchanges which would result in massive hit to all cryptos and ultimately –  downfall of online internet coins. It’s over.

What about the ants?

Small investors are colloquially called “ants” in Korea. We prefer to call them “small fry”. One of the desperate readers published following comment on this article on Naver (Google Translated): 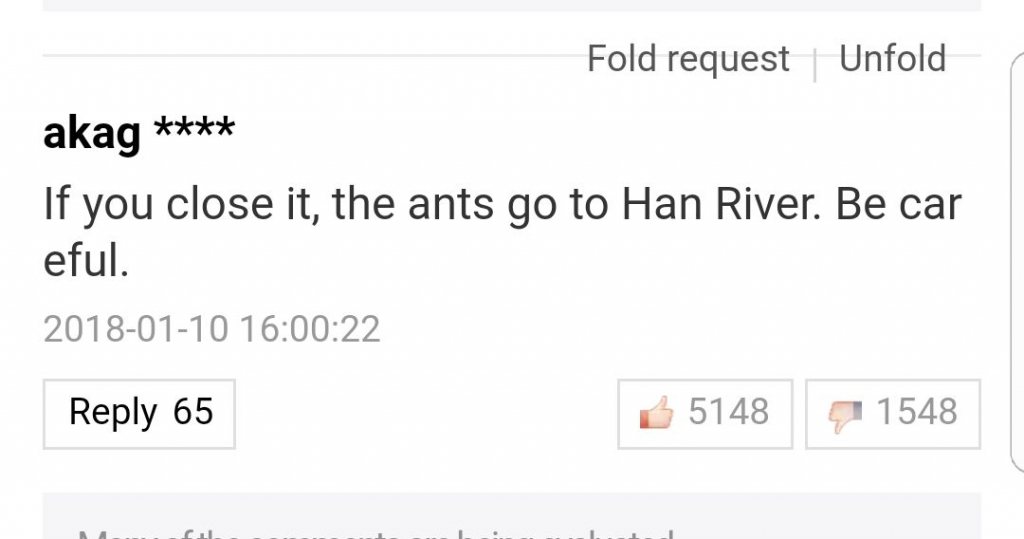 So ant means “Small investor that  buy Bitcoin”, while Korean “river Han” is something like “Styx River” in white-man Judeo-Christian cultural circle. This means that Koreans will commit suicide if exchange closure happens, which is not unlikely, given how much hope people have in cryptocurrencies as a ticket to better life – and some even staked their houses on loans taken to buy Bitcoin. Don’t be that ant. Take your money out and stop dreaming that magical Internet money will make you a millionaire. Hard work, dedication, boldness and proper life decisions are things that can make you one.

Bitconnect performed exit scam with $2.5 bln and investors are suicidal